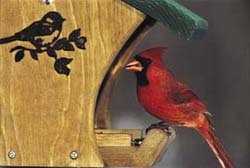 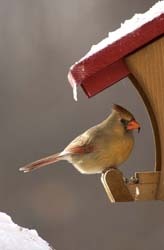 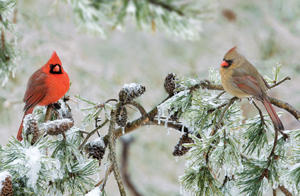 Nearly any bird feeder you put out ought to attract Northern Cardinals (as long as you live within their range), but they particularly seem to love sunflower and safflower seeds. Leave undergrowth in your backyard or around the edges, and you may have cardinals nesting on your property.

The male Northern Cardinal is perhaps responsible for getting more people to open up a field guide than any other bird. They’re a perfect combination of familiarity, conspicuousness, and style: a shade of red you can’t take your eyes off. Even the brown females sport a sharp crest and warm red accents. Cardinals don’t migrate and they don’t molt into a dull plumage, so they’re still breathtaking in winter’s snowy backyards. In summer, their sweet whistles are one of the first sounds of the morning.